Together with a team of designers, Gad V. Hakimi has created a new International vegan flag that shows our love as vegans to the Earth, and our battle to a create better and cleaner world.

Every important movement in history has a powerful and memorable flag, but until now vegans have only used symbols which can vary from country to country. Now, there is a flag to unite vegans across the globe. 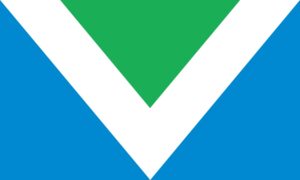 Originally, some members of the group suggested that animals should be featured on the flag, with red colours featuring prominently in memorial of the slaughtered.

However, the group eventually concluded that a vegan flag is not about animals. It’s about humans and animals being equal, and the new direction they took was a flag that uses green to show our love as vegans to the Earth, and blue to symbolise our battle to a create better and cleaner world in every aspect.